3 Ways to allow your animals to contribute monetarily 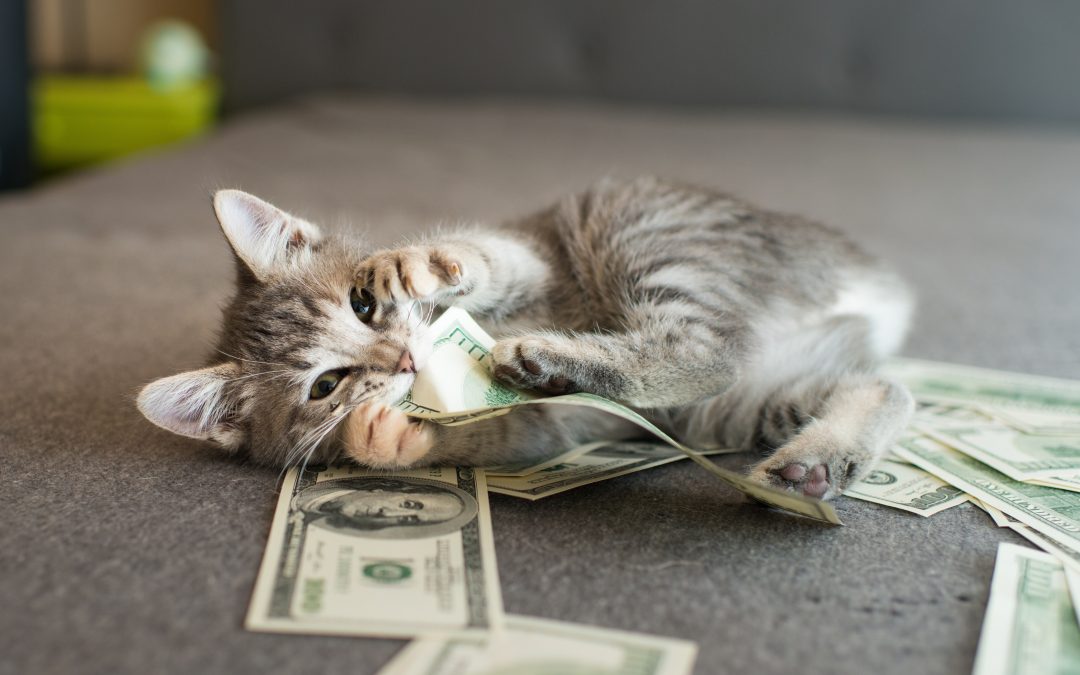 Having a pet costs money, especially when it’s a larger animal like a horse. So, the idea that animals can contribute to you monetarily might seem out of left field. What do animals even know about money?
Many years ago, the founder of Access Consciousness Gary Douglas, who has a special love for horses, wanted to create more possibilities with them. At the time, Conscious Horse, Conscious Rider classes didn’t exist.
The horses told Gary they wanted a television show! He was gobsmacked. What do horses know about television? The interesting thing he realized is that animals know a lot about our lives, including money. And, they are willing to contribute to us monetarily. Here are 3 easy ways to go about that.

#1 Don’t make money linear
Have you been in a situation where you thought you could not afford the vet’s bill? When my cat Bubba was one year old the vet said she had to be put down.
The money was one thing, but she also was really, really sick. There came a point when the vet was literally asking me if Bubba was going, or staying? I could not make that choice for her. When I asked, she was very clear, ‘I’m staying. It isn’t my time!’
Bubba was obviously correct since she lived for 20 years.
Animals have that sense and they will make things happen but you also have to be totally open to whatever it might be. If you already have a strong conclusion, the animal may not be able to override it. So, there must be a willingness on our end to receive their contribution.
As for the vet’s bills, when I started receiving them it was a bit of a shock. Yet I don’t recall being stressed about it. Even though I was on minimum wage back then, I knew the money would be there and it was. I never thought about not giving Bubba treatment.
If you look at somebody who drops off their animal at the shelter because the vet bill is too high, or they have lost their job, they have decided the only solution is to reduce expenses. An animal is often seen as an expense that needs to be cut.
In Access, we’re always looking at what else is possible? A great tool you can use is asking, ‘What else can I add to my life to create more?’ You might find that all of a sudden money starts to show up. It is never linear. It may be that you take another job, but basically the willingness to add to your life allows you to receive more.
So often we think we have to do everything and we forget about receiving from the trees, the earth, and also our beloved animals.
A lady was telling me about taking her animal to the vet and having a certain budget. In such cases, let your animal know that. Tell them that if the treatment is going to cost more, it will be a deal-breaker. In this particular case, the vet bill didn’t go over the set amount. I wonder how much the animal was contributing energetically to that.

#2 Plan for your pet
Very few people plan to have a pet. Some of us do look at all the aspects of living with a pet including vet bills etc. Other people go to a pet store, see a cute kitten, rabbit or puppy and take it home without further thought.
Remember to ask yourself, ‘If I bring this animal into my life what will my life be like in 5 years?’ Really perceive that energy. Then ask yourself, ‘What will my life be like in 5 years if I don’t get this particular animal?’ Perceive that energy also. If it is lighter not to have the animal, trust that the Universe is providing the information you cannot figure out logically.
You could be a millionaire with plenty of money to take care of the animal, and it still might not be a contribution to your life and living.

#3 Ask your pet for contribution
Of course, having an animal is not just a monetary consideration. For some people, having a pet means they are totally responsible for it. As though it were a baby. This also means that you are making all the choices and decisions for it.
What if you asked your animals to contribute to your life, living, and wealth too?
This doesn’t mean you stop paying attention to your finances. Far from it. Always know what everything costs you. Be very aware of how much money it costs you to have a horse, a dog, a cat, or even 11 cats in your life! It’s not necessarily about trying to buy the cheapest food etc. That is not going to contribute to the creation of wealth.
It was so interesting when I asked my dog Charlie what wealth meant to him. The energy he showed me was like a vast lake or a deep, slow-moving ocean. The force and the depth and the strength, but also the peace and calm that comes with all of that is what wealth is to him.

For a deeper dive into this fascinating topic, you’re invited to purchase a series of 3 calls titled Allowing your animals to increase your wealth, it’s in the shop here https://suzygodsey.com/product/allowing-your-animals-to-increase-your-wealth/