How a horse got its mojo back 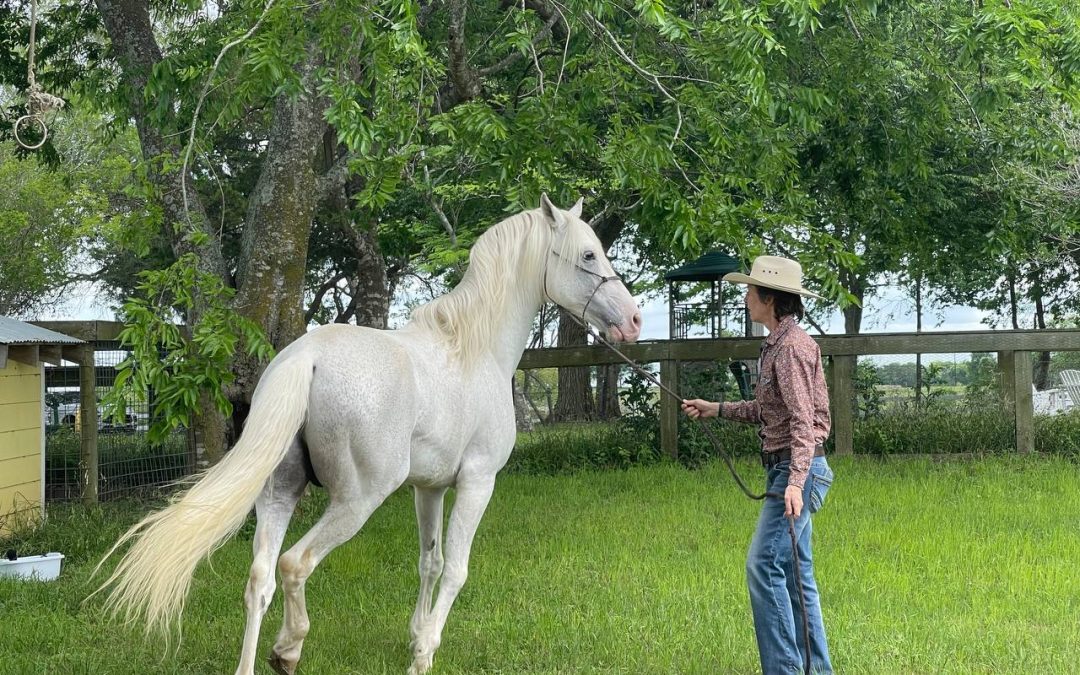 Using the tools of Access with animals can create seeming miracles because once they’re shown a different possibility, they will embrace it. Animals are willing to let go of their past in a heartbeat.
One time we had a gelding, who was in dire straits, come to a Conscious Horse Conscious Rider class.
He was brought by a very knowledgeable person who had made it his mission to get horses out of bad situations and find them new owners.
Over the years, this guy had been successful with rescue animals, but he seemed a little stuck with this particular gelding.
The horse was very kind and would do anything asked of it, but it never seemed to have fun. Overall its attitude was lackluster, almost depressed.
We started working with the horse during the class, asking a lot of different questions. Nothing pinged until a question about castration came up. With that, suddenly, we had the horse’s attention. We then received the information that the horse wanted to be a stallion. From the horse’s point of view, his genetics were special, and he wanted to pass them on.
Of course, once a horse has been gelded, you cannot reverse it. What we did was acknowledge the animal and apologize that it hadn’t been given a choice. We also cleared a whole range of points of view connected to these issues.
This was rather an uncommon situation. I’ve not come across many geldings who were unhappy and depressed because they couldn’t be a sire. And, when dealing with animals, I do my best to be open and not disregard anything.
With this particular horse, I kept using the tool of ‘What else is possible?’ and really asking for a miracle.
All of a sudden, I had an idea. What if this horse could energetically contribute everything it desired to give through genetics? What if it could take young horses under its wing and empower them?
As I said this, the horse lifted his head and began looking around with interest. His eyes were no longer dull. I noticed him acknowledging everybody in the class and connecting more to the man who had brought him to class.
‘Would you be willing to have a stallion?’ I asked the person who brought the horse. (Sometimes, people also are worried about that energy and have a lot of points of view about dealing with stallions.)
He said, ‘Yes, bring it on. I have no problem handling a stallion; as a matter of fact, I would like to have one.’
So, we ran some more clearings and did some bodywork on it. Then the session was over, and the man took his horse away.
The next day of class, we began working with the horses, and the guy brought in a new horse.
‘Who is that?’ we asked.
It was the horse we had worked on the previous day.
No one recognized him. His coat was shiny, and his eyes were bright. Even his chest seemed wider! He came prancing in and was just the proudest thing you ever saw.
That horse was excited about his future. He received our contribution and possibility for change, whereas before, he had little interest in life.
These moments can be so beautiful when we seek possibilities instead of accepting the status quo. A huge change occurred for that horse by our willingness to ask, what else is possible?
The owner ended up keeping that horse; he bonded with him and never sold him.
The choice to neuter and spay
When it comes to spaying or neutering, I am neither for it nor against it. And I always suggest people have a conversation and ask about their animals rather than choosing for them. Interestingly, not every animal desires to stay intact.
Many people who used these tools have told me, ‘Well, I did not expect this, but my dog wanted to be neutered, or my cat wanted to be spayed, or my horse wanted to be gelded.’
Generally, animals know the effects of being neutered or spayed on their bodies. Their lives change dramatically once they’re no longer attracted to mating, and some animals prefer it. Searching for a mate, fighting for a mate, and mating can be stressful for some animals.
Animals know what they’re stepping into when they are being desexed. Sometimes they have an opinion about it, and sometimes they don’t. My perspective is to ask the individual animal rather than applying a blanket rule to the pack.The Conscious Horse Conscious Rider clinic can cover a whole range of topics based on the questions that participants ask. It’s one of my favorite classes to facilitate! Check out the next one I’m facilitating with Dr. Andrew Gardella at the spacious Lazy Double D Ranch in Bleiblerville, Texas.