How to introduce a cat to a household with dogs 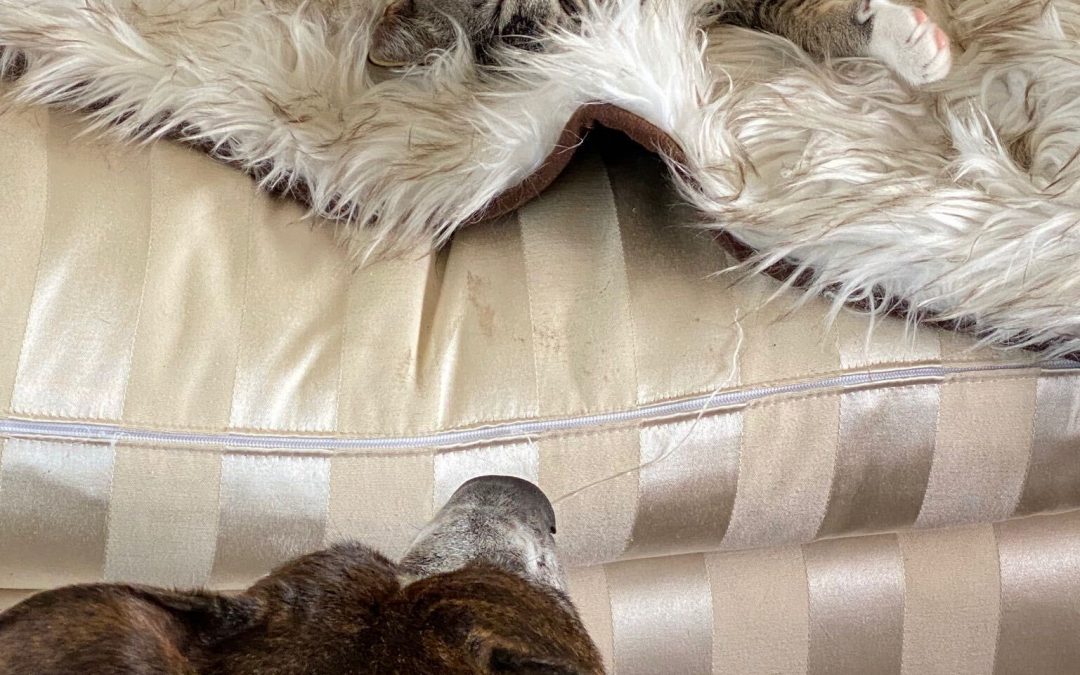 Is it true that cats and dogs are sworn enemies? As someone living with 4 dogs and 1 cat, I know cats and dogs can get along. And it’s much easier if we take a little care when introducing them.
Before bringing in a new cat (or dog), please think about how you like to run your household. As the leader of your pack, you make the rules. Since I like peace in my home, my rule is that everyone must be friendly.
Very often, people contact me after there’s a problem because they expected the animals to work things out themselves, which isn’t a good idea.
I once worked with a lady who added a dog to her family of two cats. Very quickly the dog began taking over the household. He chased the cats and was mean to them.
So, I asked the lady, ‘Which animal would you give up?
‘I would give the dog back,’ she said immediately. ‘The cats were here first and they are very dear to me. This dog is highly disruptive.’
Of course the dog had no idea, so, I made things clear to it by saying, ‘Hey Dude, if you keep acting this way, you’ll have to leave. The cats are staying. And if you’d like to stay here also, your behavior has to change, or you’ll be thrown out of your family.”
The next day, the lady called me to say the dog was behaving totally differently. It wanted to stay with the family.

Animals don’t get subtext
The easiest way to communicate with an animal is by asking for the behavior you would like to see. If a cat is visiting, for example, a relative brings their pet for a short while, explain this just as you would to a little kid. Rather than telling them ‘Don’t chase the cat,’ say, ‘This cat is visiting us and while they are here, I would like everybody to be friendly. The cat is not moving in; this is still your home. And I would like us to be friendly and mind our manners.’
From the animal’s perspective, there is a ranking system in a pack and knowing their role creates a sense of relaxation for them.
Now, you might have to remind them, whenever you see unfriendly behavior. To me it doesn’t matter if it’s the cat or dog causing the ruckus. I will step in and say firmly, ‘No, that behavior isn’t allowed.’
Alternatively, if the cat is on your lap and wants to swat the dog, hold its paws. Teach them that swatting is not allowed. Be firm and you’ll get them to fall in line without having to use force.

Cats and dogs as friends
When my cat Paul was little, I created a scenario where my 4 dogs could sniff him without it being too confronting for either of them. I held Paul in my lap with his face towards my body so the dogs could sniff his bottom. (Dogs get a lot of information through smelling each other.)
By having the cat on my lap, I showed the dogs that I was friendly towards the newcomer and that they should follow my lead. My body language reinforced my wish for everybody to get along.

Dogs fighting with cats
When the dogs came up to smell Paul, I didn’t let him turn around because cats and dogs are both predators. Usually, when predators look each other in the eye, there’s a stand-off. They must either go into fight or flight.
Some people think that if a dog and a cat get into a fight the dog will always win. I’m not so sure. A cat has claws and they are sharp. If a cat feels threatened, it will scratch the dog’s eyes. Cats are not silly; they know they can do real damage so it’s best to avoid a nose-to-nose encounter.

No running indoors
Common sense tells us what our animals are capable of. For example, I know that my dog Charlie is a bit of a cat chaser. So even if I ask him to be friendly to the cat, I don’t have blind faith he will follow through. It’s in a dog’s nature to chase anything that is running away from them.
For quite some time I didn’t leave Paul alone with the dogs because sometimes they get into a gang mentality. I didn’t want them ganging up on the cat while I was away, so I locked Paul in a room before going out.
Eventually, there came a point when I knew they could be left alone. My cat has also learned to hide under the bed where the dogs couldn’t reach him. But it didn’t happen right away.

I’m sorry…
Lastly, if you’ve already added another animal (cat or dog) to your household and they’re fighting, what now? You can’t force them to be friends, but you can apologize to the animal that was already there. I suggest something like, ‘Sorry I didn’t ask your permission to bring another animal. Now that it’s done, is there some way that we can make this work?’
One idea is to create a separate space for each animal. You can create a safety zone for a cat by putting up a little barrier that a dog can’t get through. Place their toys and bed there and reinforce that the other animal isn’t allowed there. I find that acknowledging that they didn’t choose a companion oftentimes will change the dynamics and create more ease and peace in the household.If you would like more tools with your animals, please consider joining my next Talk to the Animals class online.

All the details are here https://www.accessconsciousness.com/en/class-catalog/access-special-classes/talk-to-the-animals/Talk-to-The-Animals—Start-the-Conversation_638005777655251993/